I just had to make this doily

I have been reading about this doily on a number of blogs and couldn't resist anymore.

I first read about it in Marty's blog when she wrote about the hairy and the bald.
Then, Ais wrote about hers curling over at the 4th round. (I have to watch out for that)
And Tattingchic used the finished doily as the background to show her wonderful collection of shuttles.
And the latest is on Melissa's blog!

I don't know how many other tatters are also making this but I have a feeling that there are a lot since it is a tat-along on e-tatters. I found that out from Marty's blog. 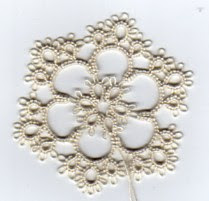 I am not a member of e-tatters so I don't have the pattern to start with. But, following the links from Melissa's blog I came to this pattern. I know I have to make the doily myself, now that I have the pattern. And this is what I have done so far.

The thread I am using is Twilley 40 which I bought from the local store a long while back. I don't know much about this thread except that it has a lot of twist in it. I had to let the shuttle hang to untwist after almost every other ring. And boy, you should see the shuttle spin!

I had not used the thread before this because of the twisting. Finally decided to make something with it, rather than just letting it lie there in the box. I only have one ball of this thread, so I hope it'll be enough to complete the doily.